For supporters of Ladies Football in the county All roads led to Ballinlough today as the Roscommon Under 14s took on Leitrim in the Connacht B Championship Final.

After months of preparation, it was down to these 60 minutes to decide the destination of the Connacht shield. Peadar Earley Park was in excellent shape and bathed in sunshine – ideal conditions for Football.
Roscommon started well and within two minutes Oonagh Kelly fired over the first point. Moments later Kayleigh Shine took the ball on and scored a point from play. Shortly after Oonagh Kelly made a darting run and got pulled down in front of the goal. A penalty was awarded, which Kayleigh Shine cooled slotted to the back of the net. Roscommon continued to dominate, scoring another point through Kayleigh Shine and a goal from Edel Beirne. Leitrim took a hold of the game and over the next six minutes scored 1-4 without reply. Roscommon settled again and Oonagh Kelly stepped up and scored a goal from play in the 20th minute. Roscommon tagged on another 1-2 before Leitrim scored another 1-1. Roscommon ended the first half with the final score coming from Kayleigh Shine.
Roscommon came back out at the start of the second half and took control again, scoring 2-5 before Leitrim scored their first point of the half. A further 2 points were traded between the teams leaving the game at 6-12 to 2-8 in favour of Roscommon. Leitrim scored their final point of the afternoon shortly after before Roscommon scored a goal to round off a comprehensive win. Final score of 7-12 to 2-9.
Captain Natasha Munnelly stepped forward to accept the shield from Liam Costigan, President of the Connacht Ladies Committee, on behalf of the team. She thanked the pitch committee, the referee, the Leitrim team, the management and the girls on the panel. Liam Costigan then called for Kayleigh Shine and presented her with the trophy for the player of the match. 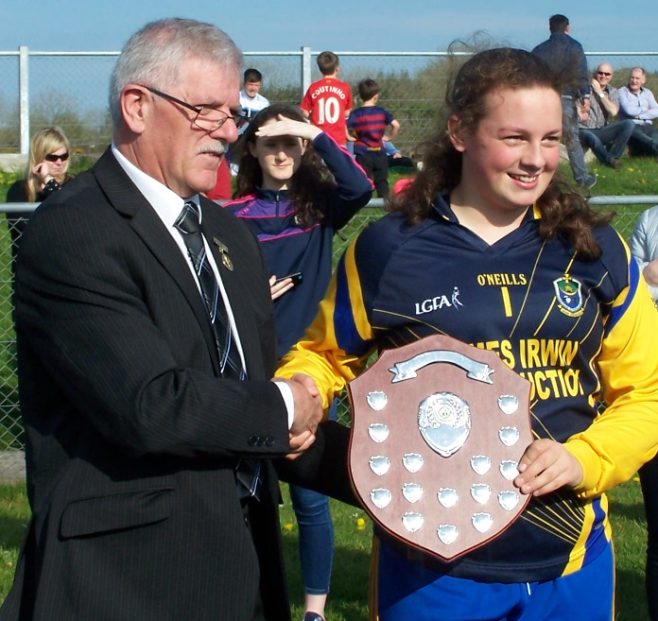