There was no joy for the Roscommon Handball representatives in the All-Ireland 60×30 Minor Doubles and Intermediate Doubles Finals in Abbeylara on Saturday but there was better news for the lads.

In the Minor Doubles Fiona Tully and Jennifer McCormack (Pictured above) lost to Kilkenny’s Aoife Holden and Ailis O’Shea in a three game thriller; 21-11, 20-21, 20-21.

The match was dominated by old rivals Tully and Holden both of whom took the vast majority of shots throughout. Fiona’s classy touches took Roscommon to a 21-12 first game win and another title looked on it’s way west when the St. Coman’s pair led 20-13 in the second, but a brilliant comeback by Kilkenny saw them take it to the third. From then on there was nothing between the sides and unfortunately the Cats took a classic match by that one point 21-20.

In the Intermediate doubles Final Fiona’s older sister Siobhan teamed up with Laura Mannion to try and win the Ladies Intermediate Doubles title against another Kilkenny outfit, Rachel Hogan and Clare Love. Beforehand this was regarded as a mission impossible for the Roscommon girls as the Noresiders are a very strong pair and so it proved as Hogan in particular dominated the match from the start and they were never in any trouble winning in two straight games. 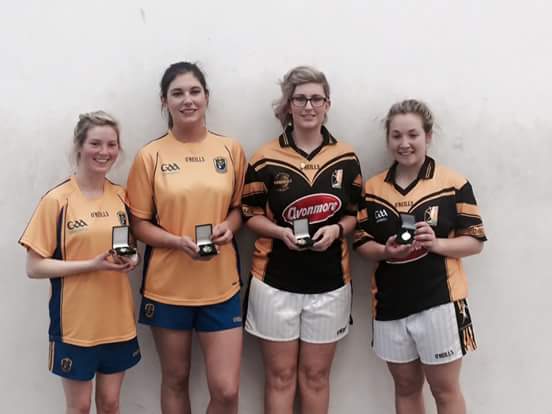 After Halid Yakhyaev received a walkover from Ulster in the Under 17 singles, Roscommon Handball had two representatives in the Juvenile All-Ireland Semi-Finals held in Fenagh, Co. Leitrim today (Sunday).

First up were the Cusack brothers, Oisin and Fionn, in the Under 17 doubles who faced relative unknowns from Cavan Adam Crosbie and Cillian O’Reilly. For most of the first game the Strokestown lads looked the better pair but were always made work hard for their aces by their determined opponents and this resulted in a nervous finish before the Roscommon pair won 21-18. The second followed a similar pattern with the Cusacks leading throughout, but never putting their opponents away and some indecisive decision-making at the end of the game cost them as they lost 21-20. The tie-breaker to 11 was an extremely nerve-wracking affair, but Fionn finally took the game by the scruff of the neck and utilised his power to give the St. Coman’s pair a win by the narrowest of margins 11-10.

Immediately after that ice-cool Magomed Yakhyaev had a terrific battle with Tyrone’s Dara Curran in the U15 singles. Curran took an early 5 point lead but ‘Mog’ never panicked and gradually worked his way back into the game with some very solid, clever play. There were numerous high-class rallies, but Mog’s consistency invariably won out and he took and impressive first 15-10. He continued where he left off in the second and took a 10-0 lead, but a change of service from Curran made an immediate impact and remarkably he found his way back into a game that seemed a lost cause. It took Mog a while to adjust to the new serve and Curran took full advantage to win the second 15-13. Mog again started impressively in the third going 7-0 up before inevitably Curran retaliated to go 8-7 up. By this stage though Mog was coping much better with Curran’s serve and as the Tyrone youngster began to crack under the pressure Mog’s nerveless play saw him take the match 15-11.