The entry for the Junior Scratch Cup Cup played off the blue course was swelled due to the Junior Cup North Connacht Zone Qualifier been held in Carrick Golf Club over weekend Saturday 9th & Sunday 10th. 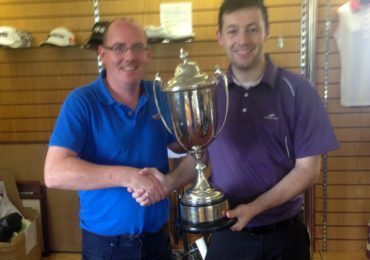 Players from 16 clubs battled it out for The Laird Cup, with Boyle Golf Club Member Gary Carty (left) coming out on top with 76 one ahead of Carrick Club Member Nathan Flynn on 77 B9 with Enniscrone Member Padraic Clince third, the nett prize went to Carrick Club Member Sean Bohan with 71.
In the Intermediate Scratch Adrian Beirne with 78 was winner, Paul Roche on 80 was second with the nett prizes going to Gary Vesey with 65 and Oliver Duignan second with 66.

Another successful weekend for the club both playing and hosting inter club golf.
On the hosting side, despite what the Irish summer threw at us, The Irish Junior Cup (handicap 5-9) North Connacht Qualifier held in Carrick Golf Club over last weekend July 9 – 10 went off without a hitch.
15 teams competed for two places in Connacht Final on 5-7 Aug in Ballinrobe. Saturday was stroke play qualifying with four scores from the five man team counting Carrick Golf Club were leading qualifiers on 307 thanks to fine play from David McDermott 75, Nathan Flynn and Maurice Cullen 77 and Gordon Kavanagh 78, Sean Bohan’s score not needed. Other clubs to make the cut were County Sligo, Westport, Ballyhaunis, Castle Dargan, Strandhill, Ballina and Castlebar.

At half time in the All Ireland 4Ball aka Cecil Ewing Carrick lead Ballinasloe 4-1 from the first leg held in Carrick Golf Club on Saturday last. Padraig MacShera & James Connors led the charge winning 5/4, next up was Kevin Ward & Colm Griffin who won 1 up. Both Declan Loftus & John Moffatt and Gerry McDermott & Seamus Sweeney won 3/2. John Crowe & Oliver Curran lost 2/1, so two points are needed in Ballinasloe on Saturday 23rd July to win another Cecil Ewing Connacht title and to progress to All-Ireland Finals in Castlebar in September.

We have a 55 inch Sony smart TV up for grabs this summer in our summer draw, tickets are €3 each or two for €5. Tickets on sale in clubhouse.

Saturday and Sunday 16th and 17th July we have New Ireland Assurance Stableford.
Damien Duignan’s Captains Prize takes place on weekend of 29 – 31 July, 27 holes stroke, make sure you have three cards in before that weekend.