Our big club fundraiser, the 20k Drop, takes place this Saturday night in Athlone Springs. Doors open at 8.00pm and tickets are €15 each or 4 for €50. Aside from the fundraising, this really is a great nights entertainment and we hope everyone enjoys it. Don’t miss it. Many thanks to all our sponsors, ticket sellers and buyers and the hardworking people on the committee who have worked hard over the last few months to make the event a success. 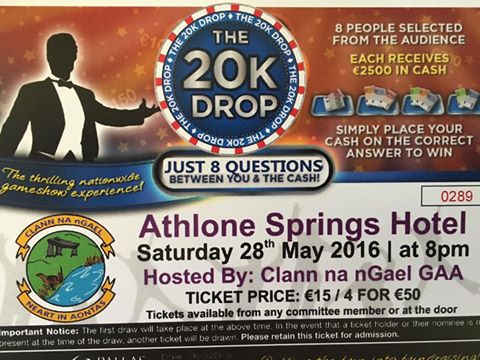 Our took on neighbours Padraig Pearses in the Division 1 League Final in Kiltoom on Saturday night. With the venue in impeccable condition as usual, and the sun shining, it promised to be another high quality game in what is becoming a regular fixture between the two clubs.
Pearses got the scoring under way with a point from play in the 3rd minute before Liam Donnelly opened Clanns account with a good point on 7 minutes. After some tight defending Clann won a free which Captain Ciaran Lennon slotted over. Pearses struck with the games first goal on 11 minutes after a laps in concentration out the field by Clann.
With the mid-field pairings very evenly matched Clann responded with 2 further points from Ian Naughton and Ciaran Lennon. Pearses made it 1-3 to 0-4 with 2 more points, one from play and a 13 metre free on 19 minutes. Clann worked an excellent goal on 20 minutes finished to net by Liam Donnelly. Pearses tagged on another point before Clann finished the half with 2 points from Naughton and Donnelly leaving it 1-6 to 1-4 to Clann na nGael at the break.
Pearses started the 2nd half the stronger pointing 2 close in frees and a goal on 10 minutes after a couple of errors from Clann. Clann got there 2nd goal less than 60 seconds later with sub Paul McManus finishing off a great passage of Clann play. Almost with the next move Pearses punished Clann again with their 3 goal of the night. That left it 3-6 to 2-6 to Pearses with less that 15 minutes to play. With Pearses deploying a sweeps Clann pushed Damien Duff up the field and he slotted over a great point from play.
Pearses restored their 3 point advantage with another point on 23 minutes. Sea Henry pulled it back to 2 points again with a fine effort from play as Clann pressed for scores. However Pearses managed one last point to put 3 in it with 3 minutes plus 1 of injury to play. Paul McManus pointed on 30 minutes, and Ciaran Lennon put 1 point between the teams with a free on 31 minutes. Clann won possession from the kick out, but it was too late and the final whistle sounded leaving the score Clann 2-10 Pearses 3-8.
This was a fantastic high quality game of football from two side that have become very familiar with each other over the years. Minor Championship will get under way probably in mid July after Leaving Cert.
Clann: David Finneran. Cian Mulvey. Conor Costello, Jack McManus. Niall Connaughton. Damien Duff. Daragh Kildea. Sean Fallon. Sea Henry. Thomas Bannon. Liam Donnelly. Michael McManus. Eoin O’Neill. Ciaran Lennon. Ian Naughton. Patrick O’Brien. Andrew Kelly. Peter Foley. Anthony Kelly. Reece Moran. Paul McManus. Adam Harney. Sean Seery. Oisin Rock. Oisin Lennon. Robbie Hardiman. David McManus.

The Sheraton Hotel sponsored Clann na nGael Senior Ladies played their third league game in Eire Og. Having won one and losing one, it was imperative the ladies recorded a win.
The ladies fought well and converted scores they have failed to in previous games. The ladies showed the conviction that was lacking in other games. Clann ladies succeeded in keeping Eire Og getting any grip on the game with some good passing and tackling. Frees were conceded easily which ended up with two players being sin binned at different times.

All in all it was a perfect opportunity to try different combinations of positions in preparation for the impending championship. They will play Strokestown next Sunday 29th May in Johnstown. Training Wednesdays at 7.30pm.

Well done to our U14 girls who beat Castlerea in their championship match in a score of 8-16 to 6-09.
Our U14’s will play St Brigids on Thursday 26th May in Kiltoom at 8pm in the Community Games competition. Good Luck girls.

Well done to U12 girls who won their championship match against Western Gaels in a score of 3-15 v 1-02.

Congratulations to Roscommon U16 ladies who won the U16 B Final against Leitrim. Managed by Ollie Colgan with Kelley Colgan on the team, they will play Tipperary in the All Ireland Semi Finals.

Well done to Shauna Connell who was selected to play with Connaught in the MMI Tournament in Kinnegad on Saturday 21st May.

Underage football for Under 6 & Under 8’s continue every Sunday morning at 10.30. New players always welcome.

It was a very busy weekend for our under 12s with all three teams making long trips from home for the final round of Spring league fixtures.

First up was our division 4 team against western Gaels on Friday. This was a very tight game from the start with scores hard to come by. Our boys never gave up and were rewarded right at the end when Temi Idowu scrambled the ball to the net to earn a valuable draw.

Next on Saturday our division 6 travelled to Ballyfarnon – Roscommon’s most northerly parish to take on the local team. A great game of football followed from both teams which was played in a great spirit throughout. Goals were crucial and we managed to get a few at the right time to record the win.

Finally on Sunday our division 1 team were comprehensively beaten by Boyle. The local team dominated from start to finish in every position and but for some excellent saves from David Campion the gap would have been even greater. There will be better days for this team.
All 3 teams await the outcome of the remaining games in their groups with all 3 teams still well placed to reach the top of table play-offs.

Congrats to Jack Macken and Kyle Moroney who played at half time during Roscommon’s championship game with Leitrim at the weekend. Well done boys! Also best of luck to Oisin O’flaherty and Paidi o Leochain who play in the Cumann Na mBunscoil hurling final for Scoil Na gCeithre Maistri, Athlone this week.

Run in conjunction with Roscommon Community Initiative and Ardkeenan N.S, starting from Drum Parish Hall on Saturday 28th of May at 2pm. Please show your support!

The draw took place in Monahan’s on Sunday 22nd of May with a jackpot of €3,800.
The numbers drawn were 3-12-13-26.
No winner, 4 match 3’s win €50:
Liam Dunne C/O Liam Dunne Either & Guy Granger C/O Brian Fallon Eamonn Lennon C/O Bernie Reilly Kieran Gavin C/O Kieran Gavin
Next week’s jackpot is €4,000 and the draw will be in the Springs.
Thanks to everyone who supports Clann’s Lotto every week.