Three students from Elphin Community College were among 6,000 Post Primary students from across the country who attended the presentation of flags and proclamation packs by the Defence Forces in Croke Park on Monday.

The event marked the conclusion of the “Flags for Schools” programme, an initiative by the Thomas Francis Meagher Foundation, the Defence Forces and the Department of Education and formed part of the 1916 Easter Rising commemorations. 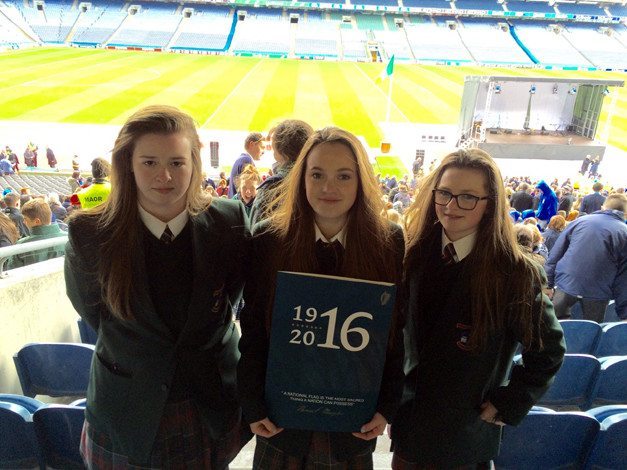 “The Irish flag flew high in Croke Park and we were seated in the Cusack Stand. Ryan Tubridy was Master of Ceremonies. We learned about Thomas Francis Meagher; the man we thank for our National Flag. We learned about the significance of the tricolour; The white representing the peace and brotherhood between the green (Irish Catholics) and the orange (the Irish Protestants).We were then presented with many tokens including a copy of the Proclamation and came home after a great day filled with our country’s history.”

A Flag raising ceremony will take place at Elphin Community College, and all Schools in the country, next Tuesday March 15.