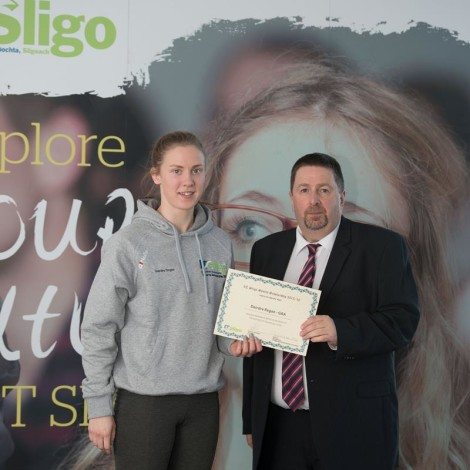 Two Roscommon students were among 32 IT Sligo Students to have been awarded new Sports Scholarships, which will develop their skills and make them ambassadors for the Institute in competitions at home and abroad.

They were presented to the students at a special ceremony on Wednesday. The first-time recipients include local Gaelic Footballers: Oran’s Deirdre Regan, who is the Captain of the Institute’s senior Ladies team, and Strokestown’s Diarmaid McGann. Diarmaid, who is studying Recreation & Leisure, is a Member of the Institute’s Freshers football team and won a Connacht Under 21 Championship medal with Roscommon GAA last year. Deirdre is studying Sport & Wellness and is Captain of the Institute’s Senior Ladies Football Team and a member of the Roscommon team.

Among the other first time recipients is Soccer goalkeeper Ali Alniyadi. Originally from Oman Ali has recently been part of the Sligo Rovers squad during their pre-season friendlies

While GAA and Soccer dominate the scholarship list this year with 24 awards, Athletics, Racquetball and Clay Pigeon Shooting also feature.

Colin Donegan from Cleveragh in Sligo is also making history as he is the first student from the Institute to receive a Scholarship in the sport of Lacrosse.

Congratulating all the students on their success, the Registrar of IT Sligo, Colin McLean, said: “Each of our Sports Scholarship students has excelled in their chosen sports activity and in so doing they have enhanced IT Sligo’s reputation as an academic setting that values and rewards sporting prowess.” In addition to the first time recipients, a further 23 students had their existing sports scholarships renewed. These include Roscommon students Meabh Holmes from Tarmonbarry and Cathal Dolan from Four Roads.

IT Sligo allocates a €50,000 fund for Sports Scholarships Scheme and all students are entitled to apply.