Four Roads 1-6 St Dominics 2-3
Last Wednesday evening Four Roads and St Dominics served up a cracking game of camogie which ebbed and flowed throughout the 50 minutes before finishing level to ensure the two sides must meet again to decide the destination of the U14 county championship for 2017. On a fantastic evening for camogie, St Dominics were first to strike and Niamh Fitzgerald had the ball in the back of the net after a flowing move involving several players. The Four Roads girls settled down to the task at hand and two frees from Siafra Finneran had them back in contention. St Dominics took control around the middle of the park through Laoise Mahon and she set up Fitzgerald and Anna Campbell for two fine points from play. However, Four Roads were able to keep in touch through Aisling Treacy from a free and Hannah Corrigan from play. This left the half time score St Dominics 1-02 to Four Roads 0-04.

The Four Roads mentors made some positional changes at half time and this appeared to work in their favour as they started the second period much stronger. After a period of sustained pressure, Ruth Gannon goaled for them and this was followed up quickly by another Treacy free from distance which put the home side in the lead for the first time. Four Roads looked the stronger team at this stage, however, the Knockcroghery based side made brought on two subs and made a number of positional switches which reinvigorated their challenge. Two quick balls into their full forward line, yielded a gaol and a point for Fitzgerald. This left Dominics ahead by a point as the game entered the last few minutes. A disallowed goal for St Dominics seemed to give Four Roads renewed hope and they spent the last six minutes camped in the Dominics half as they sought the equaliser. It duly arrived through the long distance free taking abilities of Treacy, who really was very accurate from distance all evening. Both sides had a chance a piece to win the game on the evening, however, neither were able to convert. In the end, a draw was a fair result. While both teams played well and dominated possession for periods, they will both feel that they can improve and strike the knockout blow the next day. Best for Four Roads were Aisling Treacy, Sally Bolger, Hannah Corrigan and Shofar Finneran while for St Dominics Katie Lohan, Laoise Mahon, Anna Campbell and Niamh Fitzgerald were dominant.

The replay will take place in Athleague on Monday 15th May at 7pm. We hope both teams serve up a game equally as entertaining as the drawn match. 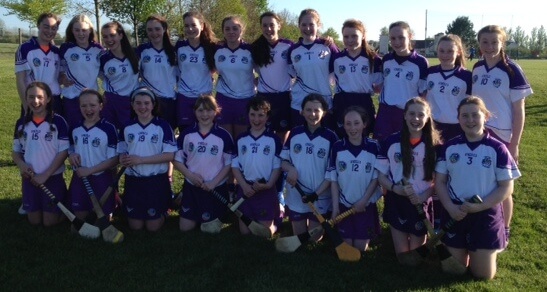 The U14 skills competition will take place in Tremane this evening (Monday 8th May) at 7pm. Each club is invited to send 3 representatives and must provide at least one helper on the evening. The winner will go forward to represnet Roscommon at the National Feile skills competition on the 10th June in Dublin.

Athleague defeated Oran on Saturday evening in the latest round of the Spring league. The final round of the league takes place next Satuday when Four Roads host Athleague at 7.30pm in Four Roads.