It was a mixed weekend for the Roscommon Ladies Football teams with the Intermediate and Under 14 teams both suffering defeats and the Minors winning.

The Intermediate team, sponsored by Ward Bros, just fell short in this final league outing against the visitors Wexford on Sunday last in Kiltoom. Heading into the game both sides had already qualified for the League Semi-Finals and this showed in the intensity and flow of the game as it was not quite the same as it would have if it were something at stake. Having said that both sides gave it their all as both ran out their panels and wanted to win in order to keep vital momentum going ahead of that Semi-Final, which ironically sees the same two sides meet again in two weeks time.

Both teams were slow out of the blocks, indeed it was a full three minutes before Joanne Cregg opened the scoring for Roscommon with a lovely individual point. Wexford replied quickly though through two points of their own from Bernie Breen and Siobhan Clarke. This was answered in the seventh minute with a Jenny Higgins equaliser. Then there was a period where both sides while having a lot of possession failed to turn it into scores until finally in the 13th minute Wexford nudged ahead again through a Fiona Rowe point and then the big breakthrough for the visitors came when a defensive error from Roscommon was clinically punished when full forward Fiona Rochford finished to the net in the 20th minute to suddenly leave four between them. The home side responded with a Rebecca Finan point but Wexford’s tail were up now and added further points through Clarke and Ellen O’Brien to leave five between them. Roscommon to their credit rallied well and kept ticking away at the scoreboard with points from Finan and two pointed frees from Martina Freyne to leave the half time score Roscommon 0-5 Wexford 1-5.

As both sides ringed the changes at half-time (Roscommon making five changes alone) it took a while for both sides to get going again. Roscommon slowly began to reel the visitors back in with points from Shelia Brady (two) and Laura Fleming left the sides level with ten gone in the half. Indeed the home side got their noses in front when Alice Kelly pointed in the 41st minute, indeed Roscommon were totally dominant at this and really should have been further ahead if it weren’t for some poor decisions and wayward shooting. In fact Wexford didn’t score for the first 20 minutes in the half, a reflection of how dominant Roscommon were. Unfortunately for the Rossies when the visitors did get on the score sheet it was a three pointer and again it was of the soft nature when a high ball from a free from Breen found its way into the net to leave them suddenly in lead despite Roscommon’s dominance. They visitors followed this with another Breen pointed free and suddenly from a position of staring defeat in the face Wexford were in command. But Roscommon rallied again with two points from Brady to leave just one in it again with the clock ticking into injury time. However as much as they tried they just couldn’t get that point they needed, in fact it was Wexford who got the last score with another Breen free to leave the final score of Wexford 2-07 Roscommon 0-11.
It was a game that neither team will lose too much sleep over and will surely have no bearing on when the cross swords again in two weeks’ time.

The Roscommon Ladies Football Team lined out as follows:

Player of the match: Amanda McCloone Roscommon. In a game where there was not too many stars because of the nature of the game the Roscommon full back was calmness personified. Running her a close second to POTM was Wexford midfielder Bernie Breen.
Turning point: Wexford’s second goal. Just when the home side seemed to be in total control Wexford got a fortuitous second goal with just ten minutes left which just turned the tide slightly in their favour.

What’s next? The Roscommon ladies take on Wexford again in their semi-final in two weeks’ time where a win is well within their grasp as they strive to keep the panel progressing with promotion a very real possibility.

The Roscommon Ladies Football Board would like to say a big congratulations to Intermediate players Natalie McHugh, Jenny Higgans, Amanda McLoone, Laura Fleming and Joanne Cregg who were selected to represent Connacht in the upcoming interprovincial championships which this year will be held in Monaghan in late April. A great honour for the girls, their clubs and for Roscommon.

Last Friday evening in Cloone County Leitrim saw the first championship games for the Stephen McGuinness sponsored Under 14 Team and the Cox’s Steakhouse Dromod sponsored Minor Team when they took on the home team in round one of the Connacht Championship. This new format of doubling up on the two grades proved to be a great success as a large crowd turned up to cheer on all teams. Unfortunately It proved to be an evening of contrasting fortunes for the visitors as our minor side ran out convincing winners, but it was the complete opposite for our U14’s as they succumbed to a surprisingly heavy defeat at the hands of Leitrim. This was not the start they needed but time is still on their hands as the strive to turn it around. On the plus side it was a good start for the minors as they begin their quest for provincial honours. 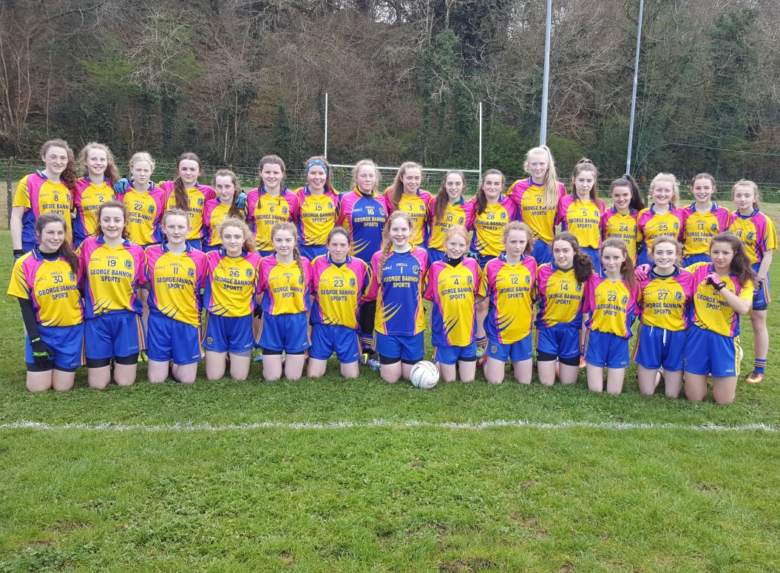 The U14 management want to thank all who came along and supported a Table Quiz in Hannon’s Hotel on Saturday last which went to raise funds for the team. It was a great success and will be of great value to the squad.
They would also like to thank all who contributed to our recent predict the score fundraiser
The management would like to congratulate the Murray team on winning the main Senior prize and the u14 girls team who took the junior prize.
Roscommon Ladies Football Board wish to thanks the sponsors who gave numerous spot prizes- Time Pieces Roscommon; O’Connor Family; Molloy Bakery; Corrib Oil; Casey’s/Supermacs Roscommon; David Hynes Pharmacy; McGuiness’s Pharmacy; Euro Giant; Macken Family; Gormley Family; Classic Cutz Hairdressers; Hester Family; Burke Family; Vicker Family and Rogers Family. The Roscommon Ladies Football Board would also like to thank Hannons Hotel for the use of their premises and for the refreshments on the night.

The Minor Ladies sponsored by Cox’s Steakhouse Dromod got their Connacht Championship campaign off to a winning start when the took on Leitrim at a extremely wet and windy evening. Leitrim, who already had a game against Sligo under the belts, started the brighter and ran into a three point lead within the opening ten minutes. Once Sinead Glennon goaled for Roscommon in the tenth minute the visitors took over and led by 2-9 to 0-6 at the break. 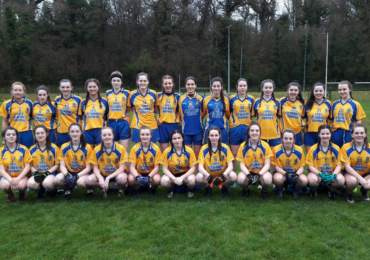 The new trend of double fixtures continues for these teams as both sides take on Sligo next Saturday in a Sligo venue not known yet as we go to print but as usual you can check social media later in the week for details.