The Roscommon Ladies Football Team, sponsored by Ward Brothers, opened their National League campaign with a good win 4-11 to 1-13 win over Offaly at Cappincur earlier.

In what was a great advertisement for Ladies Football once Roscommon got their noses in front early in the first half. They held on right throughout the remainder of the game and although there were times when Offaly got very close but could not quite get level or ahead and Roscommon showed great character to eventually win out comfortably in the end by seven points.

Offaly started the better with two early frees from their outstanding centre forward Roisin Egan and Roscommon were showing early nerves and some poor decision making in front of goal. Indeed it was a full five minutes before Laura Fleming pointed from play, this was followed quickly by another nice point from play from Jennifer Higgans. Suddenly Roscommon had settled and had a grip on proceedings. They pilled forward and goaled through Natalie McHugh in the tenth minute. Offaly responded with their first point from play from the impressive Mairead Daly but Roscommon weren’t willing to let up on the pressure they were now mounting and two quick goals in succession from Gillian Dufficy and Fleming give them a firm grip on proceedings. Offaly, to their credit, never gave up and ticked over points from Egan (2) and Daly left them nine adrift and then with clock heading nearer half time they got a vital goal from Helen Hensey to leave a little doubt in the Roscommon girl’s minds at half time. The score at the break read Roscommon 3-5 Offaly 1-5.

The second half started in a similar manner with Offaly reducing the gap with two early points, again from Daly and Egan. Roscommon again rallied and answered with two points of their own from McHugh and Fleming, but then Offaly found their best patch of the game with points from Daly (3) and Egan to Roscommon sole reply from McHugh to suddenly leave only a kick of the ball (3 points) between the sides. Indeed it was during this period that Roscommon’s Aisling MacAuliffe received a yellow card to leave the Rossies with only 14 players for ten minutes. It was all the home side at this stage and you could feel the tension among the travelling supporters.

Then in the 51st minute the games pivotal moment arrived when Roscommon midfielder Joanne Cregg broke out of a group in midfield and travelled a good forty yards before unleashing a pile driver to the roof of the net to suddenly leave Roscommon six points ahead again. Offaly were rattled and Roscommon added another point through Higgans to leave seven in it. Offaly kept plugging away and pointed through Claire O’Brien and Daly, but Roscommon were not relenting now and answered both scores with points of their own both coming from the impressive McHugh to leave Roscommon deserving winners on a score line of 4-11 to 1-13.

This sets up the Rosette’s nicely for the tough campaign ahead, while they have lots to work on the will be delighted with the hunger and appetite for goals in particular. All in all a good start to the league and a valuable two points.

Joanne Creggs goal. It was just the tonic Roscommon needed when the game seemed to be turning Offaly’s way.

Player of the Match:

Mairead Daly Offaly, this was a close call as Daly and her half forward partner Roisin Egan were outstanding for the home side. Equally on the Roscommon side Laura Fleming, Gillian Dufficy had strong periods and Natalie McHugh and Caoilionn Beirne were very impressive throughout.

Next up for the Roscommon Ladies Football Team is a though first home fixture against Tipperary in Johnstown this Sunday at 2pm. Then it’s away to Meath on the 19th February, home to Down on the 25th February, next up is two away fixtures to Leitrim on the 18th March and Limerick on the 26th March, before finally wrapping up the group by facing Wexford at home on the 2nd April.

In other news, U14 squad completed their trial period with an attractive challenge against Longford in Moydow on Sunday morning. The management used this to try out the entire panel and the final panel will be drawn up during the week and girls notified.

Roscommon Ladies Football are pleased to announce that Ward Brothers Quarrying and Plant Hire are continuing their kind sponsorship of the flagship Intermediate Team over the next couple of years. In a statement released earlier Roscommon LFGA said “Wards have been very good sponsors of our teams down through the years and we are delighted to say that they will continue to provide vital revenue towards the upkeep of our intermediate squad as the strive for League and Championship honours. Ward Brothers Director Enda Ward said he and his company were delighted to continue what was and is very harmonious relationship – a relationship which has been beneficial to both parties. As Roscommon LFGA and Ladies Football in general continues to see massive growth nationwide Ward Bros are delighted to be associated with that growth in Roscommon. 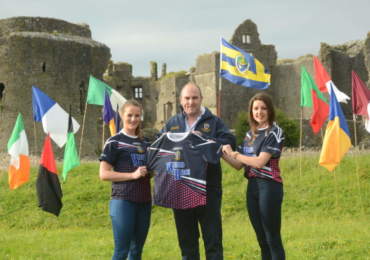 Our new year courses and seminars are almost complete now. The next one up is on the February 6th which is the Club mentor workshop, this takes place in the Fr Flanagan hall in Ballymoe, for all coaches and club officials, followed on the February 11th and 12th – Grab your whistle level 1 will take place in Hannon’s Hotel Roscommon. Please note that places are limited on these so early booking is advisable. All these details have also been circulated to the clubs