The Minor team retained the Brid Cox Trophy on Sunday last in Knockcroghery when they defeated the home side St. Dominics. This was the Club’s 4th Minor title in a row and the joint captains, Rachel Fitzmaurice and Laura Keenan together with Katie Lavin, Nora Brennan, Niamh Farrell, Aoibhe Tiernan, Maedbh Tiernan, Aoife Brennan and Lara Croghan were winning their 4th title also. Athleague were dealt a serious blow at the beginning of the game when their star player, Niamh Farrell suffered a fracture to her collar bone and had to leave the field. However, the team dealt with her absence and put up a fantastic display. The club would like to wish Niamh a speedy recovery.
Team & Subs:
Lauryn Flaherty, Lara Croghan, Eithne Brennan, Aoife Brennan,Sarah O’Roarke, Meabh Tiernan, Nora Brennan, Hollie Gavin, Rachel Fitzmaurice,(Joint Captain) Laura Keenan, (Joint Captain)Niamh Farrell, Aoibhe Tiernan, Jane Horan, Rachel Neilan, Ellie Kavanagh
Subs used: Mollie Naughton for Niamh Farrell. 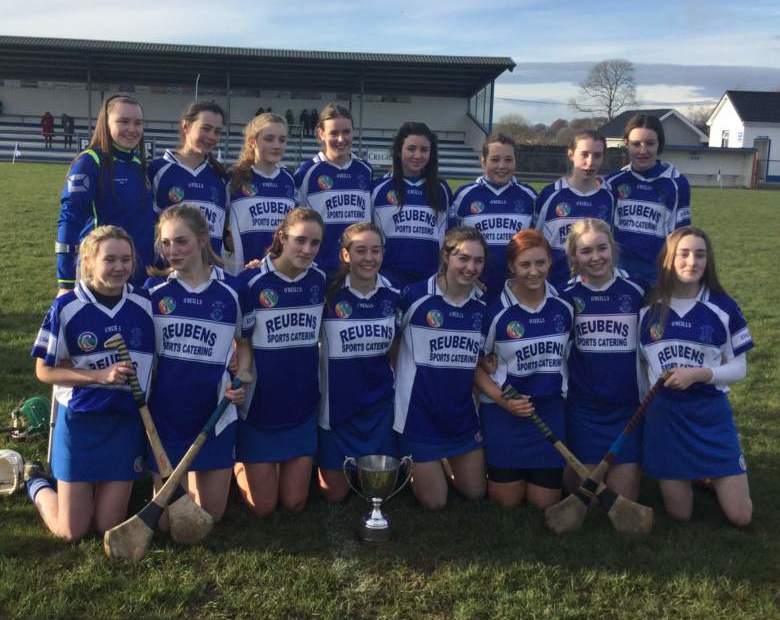 The team also had to line out without corner back Katie Lavin who suffered an ankle injury whilst playing with the Senior team.

After the game the Brid Cox Trophy was presented to the joint Captains, Rachel Fitzmaurice and Laura Keenan by the Chairperson of the County Camogie Board, Geraldine Beattie Greene. Also in attendance was Sean Cox son of Brid Cox whose memory the cup is in honour of.

The Club would like to thank all members who helped out with the fundraising event of guessing the number of balloons in the tractor at the Fuerty Fair on Sunday last.

The playing season has ended for the Club for 2016 and we would like to thank all the players, parents and supporters who came along to support the Club in 2016. It was a very busy year with a trip to Abbotstown by the U.8 and Under 10’s.