All roads led to Ballyleague on Sunday 9th October where our U.14 girls met our near neighbours St. Brigid’s in the Roscommon Division 1 County Final. The Clann na nGael girls led the game with 6 points to 3 points at half time.

In the second half Clann followed on by 3 points as well as a very well taken goal by Kayleigh Shine. However, a hungry St Brigid’s team scored a goal followed on by a penalty goal and another goal leading to a level score. Kayleigh Shine shone on the day scoring yet another point for Clann leading to Clann na nGael bringing the U14 Division 1 County Championship Cup back to Johnstown for the second year in a row. 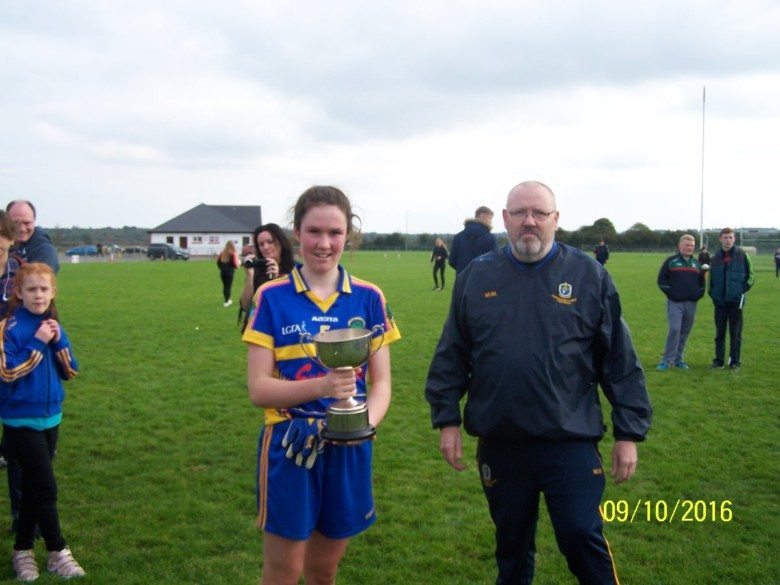 Many thanks to Mark Connell, Mary Shine and Marie Kelly who are stepping down after giving tirelessly of their time for a number of years to ladies football in Clann na nGael.

Gaelic for Mothers and Others

Best of luck to our Mothers and Others team who head to Portmarnock on Saturday 15th October to take part along with 1000 other contestants in the National Gaelic for Mother’s and Other’s blitz. No doubt the ladies will represent the club very well yet again this year.

The U.14’s fell at the last hurdle in the Championship, losing the final to a deserving St. Brigid’s team. Things didn’t go for them on the night and not having a competitive match since July certainly didn’t help our boys. Clann never got into full stride, but the lads battled gamely. Clann forced their way back into the contest early in the second half and when a Clann goal chance cannoned back off the upright, Brigid’s immediately broke up the field to score a goal, it effectively sealed the game with a six point swing.

The lads will have better days and great credit goes to them for progressing through the group stages unbeaten and topping the group. Bizarrely, this meant they had to wait for over two months to play their next game.

Many thanks to the manager Keith Gavin and his back room team of Seamie McManus, Gerry Ryan, Denis Gavin and Niall Lennon for their dedication and commitment to this group throughout the season. Best of luck to the players moving on to U.16 and best wishes to the rest of the squad in the upcoming Feile competition.

Hard luck to the U10 boys who lost out narrowly to Garrycastle in the Tormeys League B final.
The boys played excellent football on the night which was enjoyed by the large number of spectators present. Well done boys you did the club proud.

Clann na nGael Senior Team of ’66 to be honoured

The Clann na nGael team of 1966 is to be honoured at half time at the county final in Kiltoom on the 23rd October. This team won the county final fifty years ago this year captained by Tony Whyte.
Clann will be in contact with the players in the next week to provide details of the event.

Next week’s Draw in Shines, Jackpot €8,000. Thanks to everyone who supports the Clann na nGael Lotto every week.

Our Shop is now online with a wide range of O’Neills gear to purchase. The shop can be accessed via ClannGAA.ie or directly by visiting tiny.cc/ClannShop