This was another pulsating match which saw “The Bay” come back from 3 goals down at half-time to draw 3-3. Hodson Bay Athletic are now known as the most exciting team in the league with 13 goals scored and 10 conceded!

The game was delayed as the Referee ordered that the Strokestown United pitch be relined. A poor start saw Dermot “Rambo” O’Connor go into full kamikaze mode, trying to run the ball out of defence, only to be dispossessed and we found ourselves 1-0 down. It then got worse and we went 2-0 and 3-0 down following two mix ups in defence.

The lads are all still getting used to each other after being thrown together three weeks before the season started. Joey Cunniffe was taking no prisoners when asked about our defending “Rambo is a liability, he thinks he’s John Stones when really he’s just a stones.”The squad as a whole wouldn’t agree with Joey but this clash of personalities is very entertaining.

At half time Rambo inspired his men with a rousing speech about having a go and if it meant losing 10-nil “so be it”.

A far different side

The speech worked and the author is not sure if the lads took some performance enhancing drugs but the team that took the second half was a far different side.

Ian Lacey got going down the left asking questions of the Strokestown back line as did his big brother Shane on the other wing. With 15 minutes gone in the second half Lacey found Cormac Sheehy in a bit of space and the striker did the necessary taking on his man then rifling a shot low past the Strokestown Keeper.
5 minutes later Hodson Bay were awarded a free kick 25 yards out and up stepped Sheehy to bend it around the wall into the bottom corner. With 20 minutes left The Bay began to turn the screw in search of an equaliser.
Ian Lacey was replaced with Kieran Kilkenny and the Mayo native took only seconds to make an impact taking down a ball and playing it through to the on-rushing Shane Lacey, who chipped the keeper for the cross/goal of the game.
From then on the Collins Spar sponsored Bay pushed on and were unlucky not to get a winner. Especially when Joey Cunniffe went through one on one at the end but ended up “fluffing his lines”. In another truly epic game best for Hodson Bay Athletic were Gareth Ruane, Paul Fuery, Mark Grehan, Dec O’Connor, the Laceys and Joey Cunniffe. 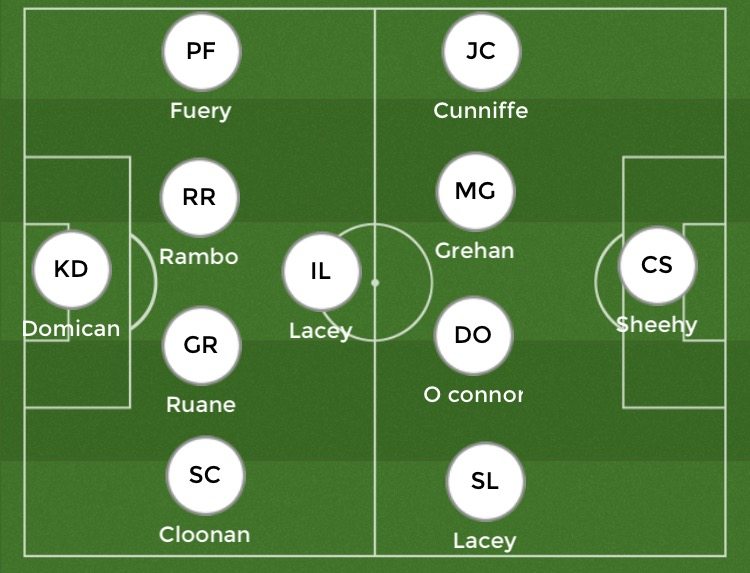 Next up for the lads is a home game next Sunday morning at 2:30pm (Note time change from some listings) against Skyvalley in Athlone Town’s Stadium.