Clann na nGael minor ladies completed a remarkable five minor division one titles in a row in Kiltoom on Friday evening last by defeating a fancied St Dominics side on scoreline of 5-14 to 1-6.

Considering that the Knockcroghery outfit had inflicted a heavy defeat on the Johnstown girls in the group stages earlier in the year this was a remarkable turnaround from the Clann na nGael girls, but one that was richly deserved such was the dominance of their play from start to finish.

Both sides started with nervousness and scores were hard to come by in the first few minutes. Playing with the aid of a strong wind Clann na nGael soon settled and began to impose their authority on proceedings. A quick goal and a point from Captain Caoimhe Lennon settled them into their grove. Dominics hit back with a brace of points of their own from Aimee O Connor and Aoife Gavin. Another Lennon point left a goal between the sides as time ticked by. But then in the next ten minutes Clann took hold of proceedings with a devastating hat trick of goals from Kelley Colgan and two from Sinead Farrell to leave Clann in a commanding position. Further points were added for Clann by Lennon (2), Kayleigh Shine, Kara Earl and Roise Lennon. Dominic’s did keep going and were rewarded with a goal from Gavin and points from Aine O Meara, Gavin and another o Connor free to leave them trailing by 4-7 to 1-5 at half time.

Playing with the strong wind at their backs for the second period St Dominics were expected to eat into the Clann lead but after their first initial couple of attacks which yielded no reward, coupled with Clann’s determination and impressive defensive showing they were unable to make their wind advantage count. Clann’s brilliant pass rate, team work and steely determination meant there was no let up for the Knockcroghery girls. Clann na nGael began to impose themselves all over the pitch, their defence and midfield were totally on top at this stage which meant an constant supply of ball was reaching their forward division which was sharp and clinical in their request for further scores. Points were added by Shine, Farrell and Colgan before Colgan again goaled midway through the half to finally quench the Dominic’s fire.
There was to be no let up from Clann. Further points from subs Louise Egan, Gillian Murray, Shauna Naughton and midfielder Shauna Connell kept the scoreboard ticking while St Dominics sole reply was a Ciara Corcoran point to leave the Johnstown girls deserving winners a and five in a row champions on a score line of Clann 5-14 Dominic’s 1-6. A truly remarkable achievement in the modern game. 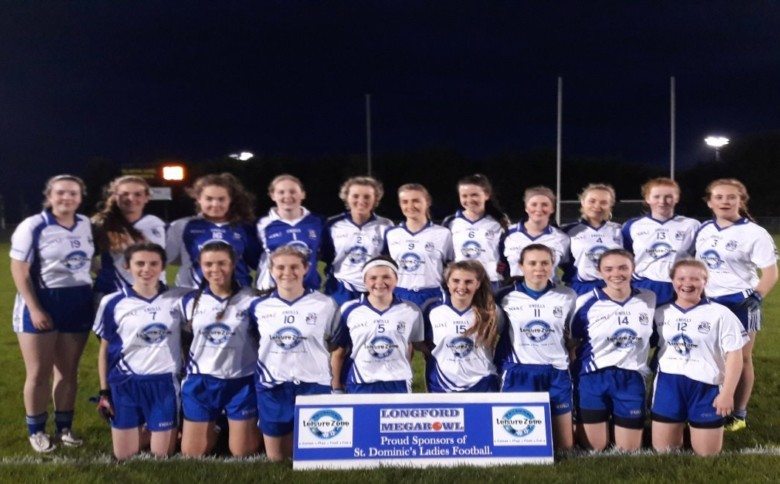