“I am delighted that Roscommon County Council have found the funding for this vital work to be carried out. Local residents, businesses and road users were hugely inconvenienced this year when flooding didn’t recede until early June and roads were impassible from January,” explained Cllr. Nigel Dineen. 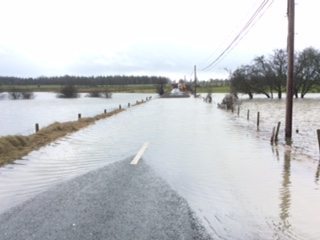 “It has to be acknowledged that last winter we witnessed unprecedented rainfall and this caused the extreme hardship suffered by locals. However, the news that the Council are now going to future proof the roads in the region to avoid future flooding must also be welcomed. The project, which will address both sections of roadway on the Ballintubber and Tulsk approach roads to Castleplunkett will cost in excess of half a million euro. Hopefully this will mean that the people of the local area and region will not have to suffer as they have in the past” said the Castlerea based auctioneer and councillor.

Cllr. Nigel Dineen said “The council are planning to build a bund along the affected roads which will hopefully act as a levy to hold back the flood waters and leave roads passable during the winter months. Appropriate pumping measures are also planned for any surface water which may occur during heavy rainfall.”

“Based on the levels of rainfall last year these plans have been developed and it is expected that the measures being put in place will be successful. There will be a need for the local authority to acquire a small strip of land along the turlough front to facilitate the building of a bund but I would expect local land owners to be co-operative during the negotiation process in order to find a solution to this very serious problem.”

Roscommon County Council hope to start works in the next few weeks on the flood prevention measures, provided everything goes according to plan. Hopes are high that this winter will see the locality go un-interrupted because of severe flooding. Nigel Dineen thanked Roscommon County Council for prioritising the Castleplunket area for flood prevention works and concluded by saying “I hope the measures being planned will be sufficient, there are no guarantees in life and especially with respect of unprecedented climatic change factors, but I am hopeful that based on the conversations I have had with the senior engineer that the works will solve this problem once and for all.This is a very good news story and is an example of what can be achieved when the local community, elected representatives and the local authority join their efforts to achieve desired results.”