The McGarry Trophy played on Sunday 21st August saw the biggest turnout of Members for a weekly competition, (outside Presidents Day & Captains) this season. Top of the list playing in his first McGarry trophy was Keith Hogg with a great score of 63, four ahead of Fiachra Neary on 67, with Seamus Sweeney third on 68, David McDermott won the gross, Captains Prize winner Mick Masterson was 4th and Tom Daly was 5th. As usual the McGarry family had a wonderful array of prizes and we thank them for their continued support of the club.

This evening (Monday) we played Enniscrone in round two of Connacht Shield with 3 matches at home. Result to follow. On Saturday week September 10th we play Greystones in the All-Ireland 4Ball (aka The Cecil Ewing) in Castlebar. If successful on Saturday we play All-Ireland final on Sunday 11th also in Castlebar.

Well done to all who took part in our  series of Summer Golf Lessons with Pete Duignan. We look forward to seeing you all again at our Halloween Golf Camp. Last Wednesday’s Adult and Child Scramble was won by Alan and Matthew Ffrench (Pictured above) with Anthony Noone and Emmett Regan in second (Pictured Below). 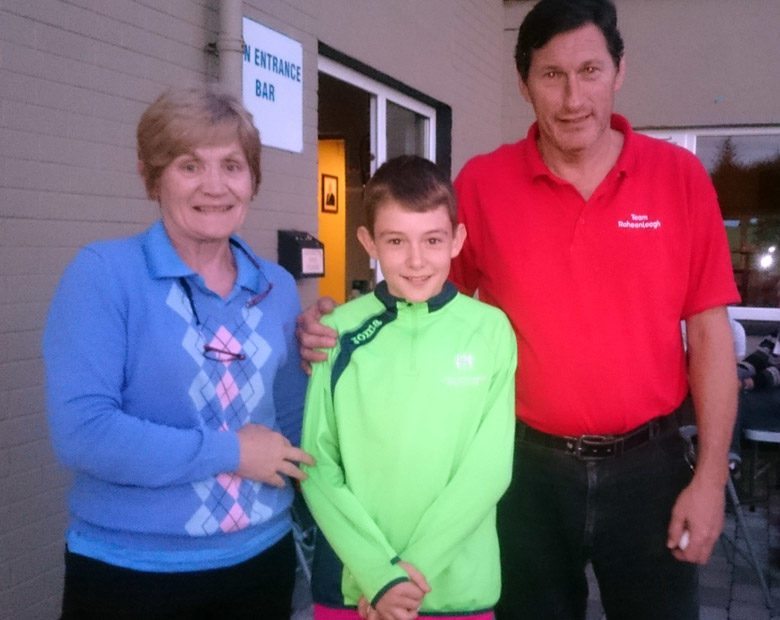 This weekend, the 2nd & 3rd of September Carrick Golf Club are holding the John McCarthy Golf Classic. On the night of the 3rd friends of John McCarthy are hosting a Trad Music Event with an Auction & Raffle in the Bush Hotel, Carrick-on-Shannon @ 8.30pm. The weekend is being organised to raise funds for Communication Technology and a Wheelchair Accessible Vehicle for John. Book a tee time online at www.carrickgolfclub.ie using the Open Booking tab or by calling the club 0719667015 but hurry not many tee times left.

On Sunday we have The Cottage Stroke first of 4 competitions in The Final 4 Series, double GOY points on offer.

The Club annual golf classic takes place on Fri 23, Sat 24 & Sun 25 Sept, this is our major fundraiser of the year and all Members are encouraged to organise a team with golf friends from other clubs. Entry is €160 for team of 4. Book online or by calling the Club.

With weather looking lovely this week, should be some good scores in on Wednesday.
Garvey And Lynch Cups:
Remember first round to be played by the end of this week. See draw in LLR.

We have a 55 inch Sony Smart TV up for grabs this summer in our summer draw, tickets are €3 each or two for €5. Tickets on sale in clubhouse.

Our condolences to Marie Leydon on the passing of her sister Sr. Anna Duignan. Ar dheis de go raibh a h-anam.