In this the third round of the Senior Championship played in wet and windy Ballyleague saw the Supermacs and Matrix Bathrooms sponsored Clann team fail to add to their two points in the table leaving them with two points from possible six. This makes next weekends home game against St Brigid’s a must win game for Clann to stay in control of their destiny in this year’s championship.
Castlerea were the team who hit the ground running racing into a four point lead after six minutes with a goal and a point to no score. It took Clann twelve minutes to register a score after some wayward shooting. They then added another point on fourteen minutes but still failed to ignite and continued to struggle to get a grip on the game.
Cathal Callinan was getting good possession but Clann failed to capitalize on this and shot seven wides in the first half. Clann went in at half time trailing one goal and four to five points having plenty of possession but taking the wrong shooting options leaving Castlerea in control of the game.
Cathal Callinan scored two points in the first half from play with Donie adding two frees and Cathal Shine one from play.

Clann withdrew Davy Connaughton at half time and introduced Matt Scally. Clann were still struggling to get a hold of the game as time went by. A speculative ball by Johnny Dunning into Ruari McManus on the edge of the square saw Ruairi score a well taken goal leaving Clann up one on fifty minutes. This was a perfect opportunity for Clann to grab hold of the game and push on but they failed to take the opportunity. David Flynn received a yellow and then a black which resulted in a red, while Matt Scally also saw black.
While some of the refereeing decisions were hard to fathom, it was not he who lost this game for Clann. Clann had just two scorers in the second half – Ruari’s goal and Jack Connaughton’s point from play.
In total Clann had five scorers which is not sufficient to win a competitive championship game.

The Clann team have a tough outing next week in round four against St Brigid’s who will be looking to avenge their loss to Clann at the semi-final stage last year. Hopefully next week the weather will be better but to have paid into a double header championship game and to have to watch it from your car to seek shelter from the weather is less than satisfactory. Maybe its time to select four or five venues in the county that have stands for some supporter comfort to play championship football.

This was the the third round of the Intermediate Championship held in very open gale force conditions in Ballyleague.
Clann fielded a very strong young team and started well in the first half, putting over some very nice points with the help of Ciaran Lennon who returned from his run with the county minor team. Ciaran put at total of 3 points of of Clann’s total of 7 for the first half. Martin Costello gave his all in the first half to keep St Barry’s David Keenan from causing too much damage. Ross Naughton made in-rows several times through the opposition defence and scored a fine individual point. His younger brother Ian added two more to bring the score to 0-7 to 0-4 at half time.
Ross Naughton again was on the scoring board putting two point over early in the 2nd half. Martin Costello was substituted at half time and this has a telling factor in the midfield area. St.Barry’s got a grip on the game and hit 4 points on the trot, but the turning point of this game came with a well taken goal by St. Barry’s. They dominated the game from that point and looked stronger as the game finished out. Clann will need results and a win in their next outing.

A magnificent score achieved from a team that had never played together before Thursday evening in St. Ciaran’s. Clann turned up with 16 players but played an 11-a-side game due to our opposition having only 12 players.
We lost Shauna Connell from an injury after 5 minutes of play, but the team held firm and won out comfortably in the end. Excellent scores and defence by all of the 16 panel of girls.
Team: Eadaoin Lennon, Emma Kildae, Megan Kelly, Rachel Naughton, Aine Connaughton, Shauna Connell, Sinead Farrell, Kelley Colgan, Caoimhe Lennon (Captain) Roise Lennon, Kara Earle.
Subs: Molly Dolan, Amy Quinn, Aoife o’Neill, Christina Connell, Louise Egan.

The Senior Ladies were presented with new gear by their team sponsors the Sheraton Hotel, Athlone. Huge thanks to their management and staff for their continuing support of our ladies. The Clann Ladies will certainly be well turned out for their upcoming games.

Congratulations to Kelly Killian, Senior Ladies player, who married Shaun Harrison on Friday 5th August. Wishing you both a lifetime of happiness. 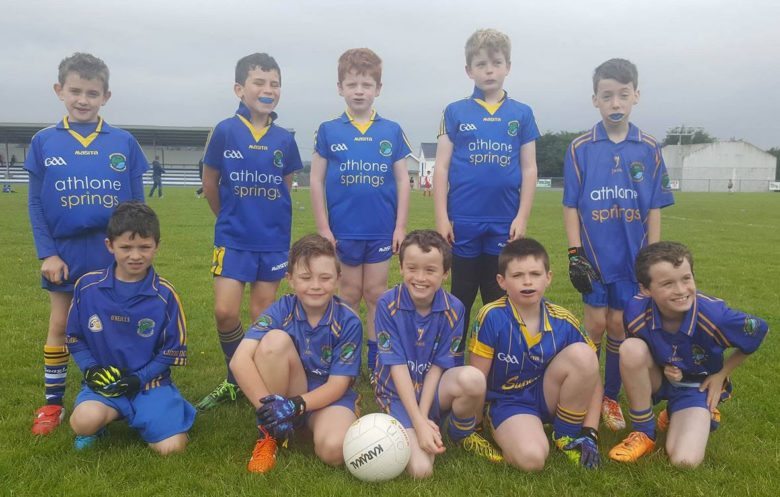 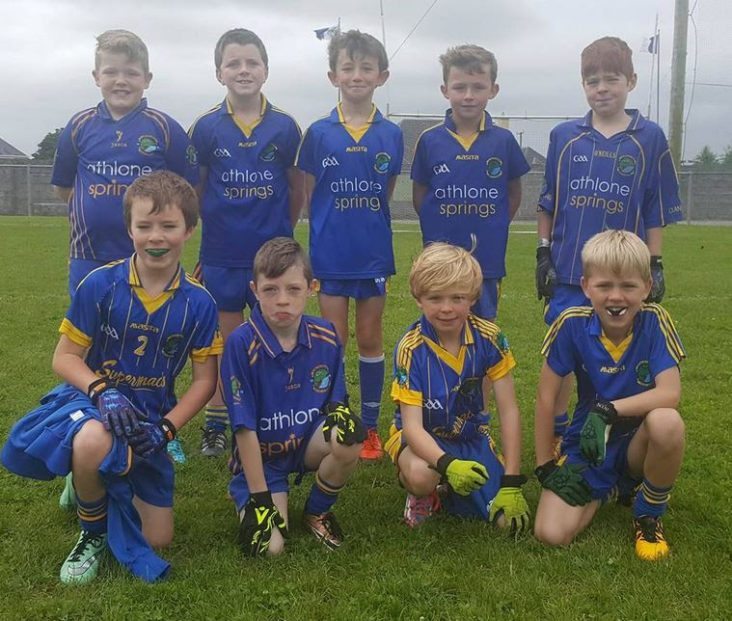 Two places have become available on the Clann Holiday. If you’re interested in going, please contact Mary (0877838966) or Breda (0868971409) as soon as possible. Sure to be an amazing trip!
For more info please visit our Facebook: ClannGAA page.

Next week’s jackpot is €6,200 and the draw will be in the Monahans.
Thanks to everyone who supports Clann’s Lotto every week.

Our Shop is now online with a wide range of O’Neills gear to purchase. The shop can be accessed via ClannGAA.ie or directly by visiting tiny.cc/ClannShop