Siofra Mahon, a student of the Convent of Mercy, Roscommon, was recently announced as the overall winner of the county’s Poem For Ireland Competition.

Speaking at the presentation ceremony, which was held at Roscommon Library, the Co-ordinator of the County’s Ireland 2016 activities Richie Farrell thanked all the students and teachers for their involvement in the competition and regretted that it had not been possible to convene all participants at the presentation event but added that “we will do that at later stage as part of a wider project.”

He went on to say that “The purpose of this short event is to make a presentation to our County Winner of the Poem For Ireland Poetry Competition, which will go forward to represent County Roscommon in the national finals. This competition is a joint endeavour between the Department of Education and Skills, The Public Library services, the Libraries Development, Local Government Management Agency and the Roscommon Ireland 2016 Centenary Programme and I want to them all for their support.”

“As you are all aware, I am sure, the Roscommon Ireland 2016 programme contains over 60 events of a wide ranging commemorative, historical, youth, Irish language and Diaspora nature On the Ireland 2016 cultural expression strand, literature programmes, arts projects, poetry and prose feature strongly and are an integral learning and education part of the programme.”

“We are delighted therefore to announce that Siofra Mahon, from the Convent of Mercy School, Roscommon is the overall winner of the Roscommon Poem For Ireland Poetry Competition and I would like to congratulate Siofra on her poem.”

Siofra was presented with her award by Cllr. Paddy Kilduff, Cathaoirleach of County Council and was joined at the event by her Teacher Mrs Whyte and Principal Miriam Hunt.

Siofra’s Poem can be viewed below 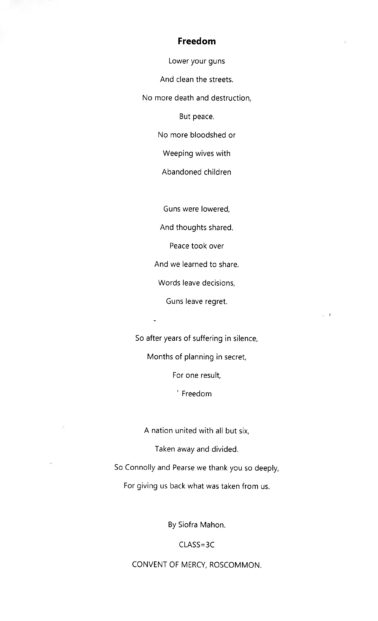