Roscommon people can now search Easter Rising Records online for first time thanks to a new, free, service from Ancestry.ie

For the first time in history these significant intelligence files regarding key figures in the 1916 Rising are being made available online to the Irish public.

This rare collection includes the execution orders for the seven signatories of the Easter Rising Proclamation as well as 60,000 images, hand drawn maps, personal letters and photos concerning key figures involved in the events of 1916.

Rhona Murray, Family Historian at Ancestry comments: “These papers were deposited in the National Archives in Kew, Surrey in 1922 so they are virtually unseen by most Irish people. They are a very significant part of Ireland’s history containing some crucial and fascinating information about the events of the 1916 Easter Rising and the people involved. We have digitised intelligence profiles, Courts Martial records, personal letters and photos which gives a very comprehensive picture of what happened during one of the most important events in the history of Ireland”.

Included in the collection are the following records:

The Courts Martial Records ordering the execution of the seven signatories of the 1916 Proclamation – Padraig Henry Pearse, Eamon Ceannt, Thomas James Clarke, James Connolly, Sean MacDiarmada, Joseph Mary Plunkett and Thomas MacDonagh – as well as the orders for eight other executions held between 3rd-12th May 1916.
Their guilty pleas, evidence brought against them and their sentences of ‘death by shooting’ are also included.

Many personal letters from concerned family are in the files, including the letter written by Padraig Henry Pearse to his mother Margaret. In the letter Pearse describes his movements between the GPO and Moore Street during his last surviving days before surrendering “in order to prevent further slaughter of the civil population and in the hope of saving the lives of our followers”.

He notes his struggle between the majority’s will to surrender versus his own personal desire to rally the troops one final time. He expresses his hopes that the British Forces will spare the lives of the followers of the Rising but does not believe that the lives of the leaders would be spared. Pearse’s letter was dated 1st May, he was executed by shooting two days later on 3rd May. His letter to his mother was never posted.

Gathered by British intelligence against a large group of nationalists, the Dublin Metropolitan Police and the Royal Irish Constabulary kept daily records of the movements of those suspected of being disloyal to the Crown. Figures include Éamon De Valera who was the only leader of the Rising not to be executed.

Martial Law was declared in Ireland on the 25th of April 1916 in an attempt to maintain order on the streets of Dublin. During the aftermath of the Easter Rising, and during the years of the Irish War of Independence, civilians were arrested under Courts Martial if suspected of being pro-independence and committing treason against the Crown.

These records include details of arrests made for conspiracy, murder, treason, and securing and publishing secret government information. Also contained in these files is an alphabetical roll of prisoners and detailed individual prisoner cases imprisoned as a result of Court Martial Proceedings.

The new Easter Rising collection is available to view free and forever at www.ancestry.ie 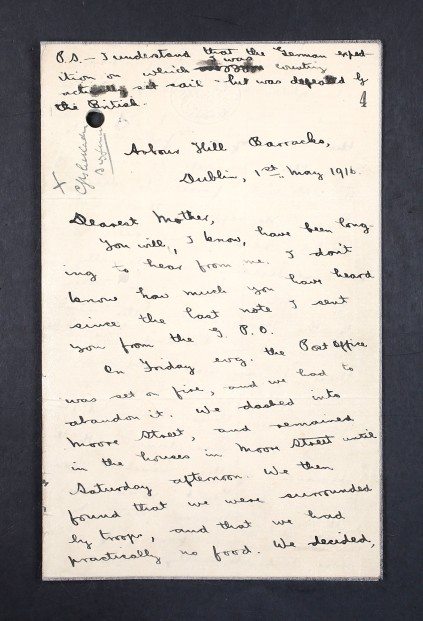