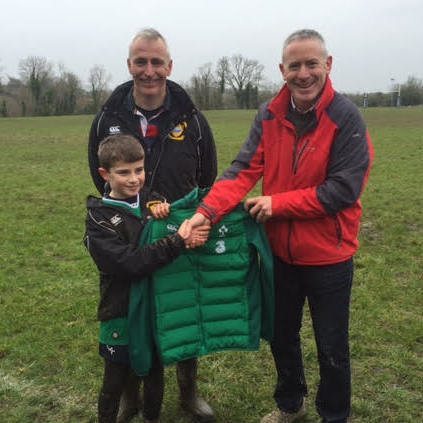 On Saturday February 20th the minis hosted Cavan RFC for their final home blitz of the season at the Carrick RFC home pitch on the Castlecarra road.

Under 9s
There was a good turnout of 14 under nine players on a cold wet day. The Cavan team who due to a different registration date in Ulster rugby were at least 6 months older than the Carrick players, were slightly ahead in physical development started much stronger. As the game progressed Carrick began to play to their own strengths with some strong running and last ditch tackling stopping some certain Cavan tries. The Carrick attack put the Cavan defence under severe pressure when they moved the ball wide to the Carrick speed merchants who ran in some excellent tries.

Report on the Under 10/11’s match
Cavan RFC’s under 10 & 11 team arrived at Castlecarra Road with big players but short on numbers. This meant that they had to field a mixed team of 10/11’s. As a result Carrick fielded two teams of mixed 10/11’s as well. The much larger Cavan team dominated the physical encounters and they were helped by the usual slow start by Carrick. However as the game progressed Carrick came more into it with improved tackling and attacking play. With their seize and well drilled rucking Cavan dominated the break down play but Carrick improved their attacking and there were a few impressive runs at their try line and brave tackles to protect ours. At the end of the day Cavan proved to be the stronger team but we learned a lot about ourselves, recognising our strengths and giving us areas to focus on in training in the next few weeks.
As coaches we were very proud of the Carrick players who never gave up in a really tough encounter. We have a lot to work on before the end of the season Connacht Blitz however today’s game highlighted the areas will need to work on in training. Well done to all the players.

Under 12s
In tough conditions the Under 12 team took on their counterparts from Cavan last Saturday in Carrick. The Carrick lads started slowly but grew into the game as it progressed. Every player on the pitch gave it their all and despite losing to a strong Cavan side they battled through the mud to the very end, running in some good tries along the way. Well done lads.

Training for the upcoming Connacht Blitzes for all age groups continue next Saturday.

Your Club Your Country Competition

During the recent YCYC national draw Carrick RFC Minis and Youths coaches decided to enter all buyers and sellers of tickets (at mini and youth level) free of charge into a local draw to ensure that we had a local winner in the competition.
Following Minis training on Saturday the lucky winners were drawn with Liam Taylor winning the Signed Robbie Henshaw Jersey, Ita Connolly wining an Ireland jacket and Pat and Ann McGuire winning a signed Connacht Rugby Ball. Winning sellers won either rugby balls or cinema tickets.

What better way to spend a Sunday morning / afternoon than supporting your local Carrick RFC Senior and Youths teams. All home matches take place at Carrick RFC pitch in Castlecarra and entry is free of charge.
Keep up to date on all news and fixtures by visiting CRFC website – www.carrickrugbyclub.ie , or follow us on Facebook and/or Twitter.