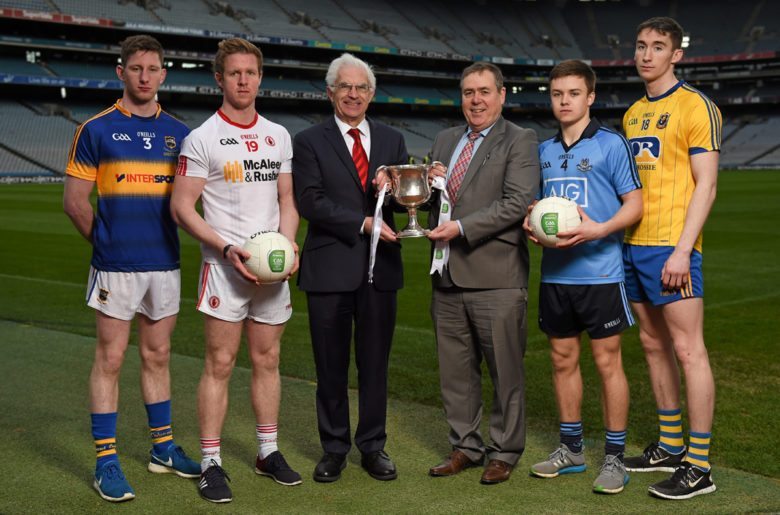 Roscommon was well represented at the 2016 EirGrid GAA Football Under 21 All-Ireland Championship was officially launched earlier today in Croke Park.

EirGrid, the state-owned company that manages and develops Ireland’s electricity grid, enters its second year of sponsorship of this competition and will continue to promote the Championship. This includes the EirGrid Player of the Month awards, as well as recognising the outstanding players of the Championship through the EirGrid 21 Under 21s initiative, which will be announced at the conclusion of the Championship in May.

The 2016 EirGrid ambassadors, who will assist in promoting the competition between February and May, are former U21 Football All-Ireland winner for Meath, Trevor Giles, and former U21 Football Ulster champion for Tyrone, Sean Cavanagh. Trevor and Sean, together with the Gaelic Writers Association, will choose the EirGrid 21 Under 21s as well as participate in initiatives to promote the Championship in the coming months.

The first throw-in of the 2016 Championship is in Leinster on 24th February, while games will begin in Ulster, Munster and Connacht on 9th March. Roscommon host Galway in the Preliminary Round
Roscommon in Kiltoom that night at 7:30pm.

Speaking on behalf of the GAA, Uachtarán Chumann Lúthchleas Gael Aogán Ó Fearghail said; “The EirGrid GAA Football U21 Championship was a hugely entertaining competition last year and we are looking forward to the 2016 championship offering similar levels of drama and entertainment in the coming weeks and months.

“The competition provides young promising footballers with a platform to parade their undoubted talents on and a window to future progress. Crucially, it also provides them with the chance to compete for a coveted All-Ireland medal.

“I wish all of our competing players and counties well in upcoming assignments and I would like to acknowledge the support of EirGrid in helping us to bring the competition to the widest audience possible.”

EirGrid chief executive Fintan Slye commented; “We are extremely proud to partner with the GAA and sponsor this Championship which affords us the opportunity to get behind the most talented young footballers in the country.

“At EirGrid we manage and develop Ireland’s electricity grid and our business mirrors this Championship in that it covers the entire country. We need to ensure that there is a bright future ahead for the young people of Ireland. With the incredible talent on display in this Championship we are sure that the future of Gaelic football is very bright for years to come.

“On behalf of EirGrid I would like to extend our very best wishes to all players, managers and backroom teams, as well as their parents and families, for the Championship ahead.”