Collectively known as “The Fooderinos” their project looked at Food Miles and concluded by encouraging local retailers to source food locally. 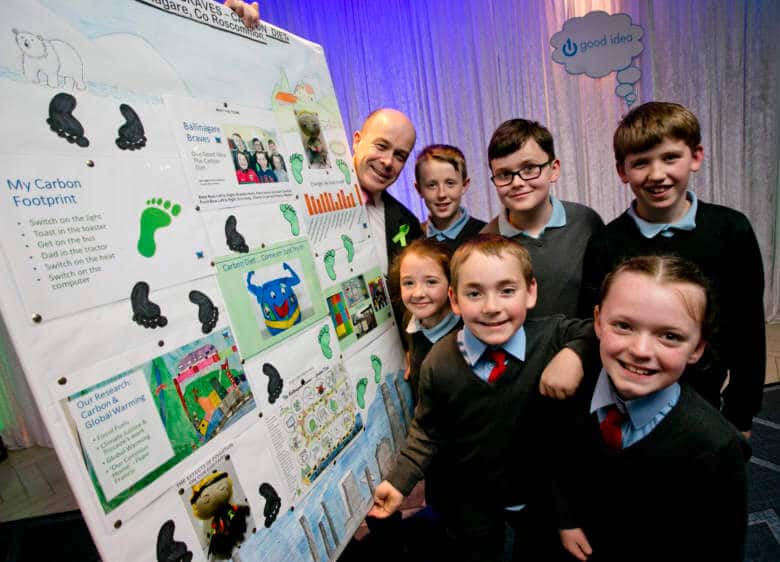 The SEAI’s One Good Idea Competition, which is supported by AIB, encourages students to create innovative and inspiring campaigns to highlight the small changes that can make a big difference to our lives, our pockets and our planet. This year, over 350 campaigns were developed by young people all over Ireland with 20 teams for the national Finals.

Ursuline Secondary School from Thurles in Co Tipperary were named as the overall winner of the One Good Idea competition for their campaign ‘Wattaware’. The campaign aims to raise energy awareness and tackle climate change by educating people in their community on the long term savings the can make when they choose household appliances with higher energy ratings.

Commenting on the success of these campaigns, Minister for Communications, Climate Action and Environment, Mr Denis Naughten TD, said:

“At the heart of the SEAI One Good Idea programme is the development of the engaged, active and creative citizen. It’s extremely encouraging to see the work, dedication and passion these students have shown in raising awareness of the issue of climate change and getting their classmates, teachers, families and communities to make small changes to their behaviour. Small changes can make a huge difference so it is exciting to see so many inspiring ideas here today.”

Over the last nine years almost 6,000 students from primary and secondary schools from every county in Ireland have been involved in making positive changes in their homes, schools and communities.

Speaking at the final, Mr Jim Gannon, Chief Executive of the SEAI, said:

“What this programme shows is that we have some of the brightest and most creative minds in the country. The campaigns were of an exceptional standard this year and demonstrated the creativity and determination of our country’s young people in contributing to a better, more sustainable future. That is what One Good Idea is all about – empowering young people and encouraging small changes that collectively make a big difference.”

“I would like to pay tribute to the teachers who get their students involved in important campaigns like this one. Young people learn by example, so thank you for the great example you are setting our younger generations.”

Commenting on their involvement in the SEAI One Good Idea programme, AIB’s Director of Corporate Affairs Bobbie Bergin said:

“The future of our country looks bright when we see the ideas of these young innovative people who, given the standard of the SEAI One Good Idea competition, are clearly brimming with serious concepts, designs and plans. Their consciousness of climate change and how to combat its effects is striking and banks like AIB are in a position to provide practical support to help them bring their brilliant ideas to fruition”.