A leading hydrologist and ‘turlough expert’ has indicated that there is a case for compensating farmers whose lands become designated flood plains in a bid to tackle the ongoing flooding issues in the country.

Picture Credit: Mick McCormack
Professor of Civil and Environmental Engineering at Trinity College Dublin, Paul Johnston believes that while flood defence barriers like walls and embankments as proposed in the CFRAM study are part of the solution to flooding, it will narrow the channel of the river and displace water elsewhere along the catchment. Mr Johnston said that a successful technique which was used in other parts of the world such as the Netherlands involved providing additional storage in the system by controlled flooding in designated parts of the landscape upstream or downstream from turloughs and compensating the relevant landowners.

Mr Johnston made the comments during an ‘Action on Flooding’ conference which was held in Strokestown on Monday. Over seventy people turned out for the event which was organised by Fianna Fail TD and Spokesperson on the OPW and Flood Relief, Eugene Murphy and other speakers included Senior Engineer with Roscommon County Council Eugene Dwyer while John Hanley, County Roscommon IFA chairman and Sean Finan, President of Macra na Feirme also highlighted the concerns of the farming communities and their fears over reoccurring flooding in the winter months. Minister for Communications and Roscommon-Galway TD Denis Naughten also attended the event. 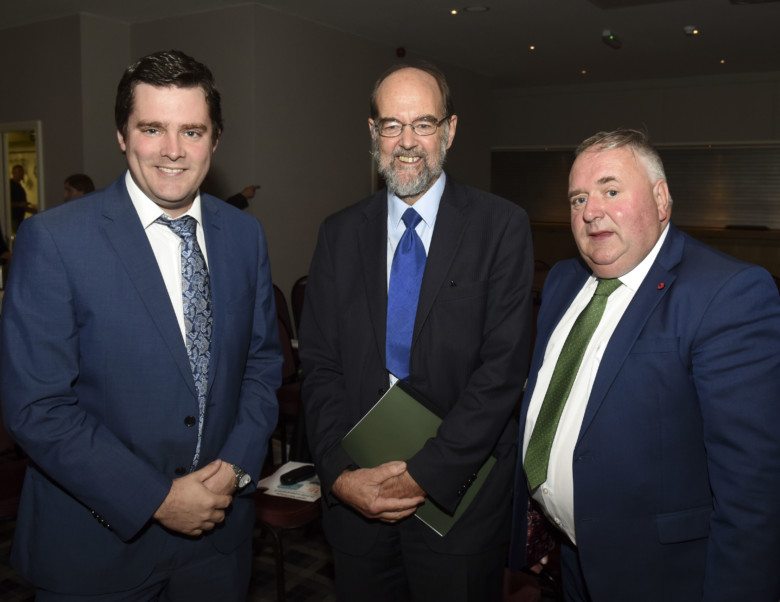 The conference was organised in response to the potential flooding challenges that homeowners, members of the farming community and general public face heading into the winter months. The conference was opened by Cathaoirleach of Roscommon County Council, Cllr Tony Ward. Deputy Murphy also held the local launch of his new bill, the ESB Supply (Management of River Shannon) Bill 2016 at the conference. The Bill aims to tackle River Shannon flooding.

“This bill addresses concerns outlined by various community groups and aims to update old legislation in order to ensure the ESB has full flexibility in setting water levels on Lough Allen, Lough Derg and Lough Ree. This will help ensure that decisions on water levels are made in conjunction with relevant bodies without any legal constraint and will help to maintain an adequate, safe water level,” said Deputy Eugene Murphy.

“Areas like Lough Funshinagh, Dysart and Castleplunkett were severely hit in the winter floods, with many farmers only getting back on their feet in the last number of weeks. They cannot afford another winter like 2015 – they simply won’t survive. The aim of the conference was to get answers to some of the outstanding questions in relation to flooding and also to gain an understanding of suggested solutions,” said Deputy Murphy.

that not “one bucket or shovel of silt” had been taken out of the River Shannon since British rule and effectively there had been no management of the River Shannon. He stressed that work was ongoing in relation to flooding issues and he referred to the Geological Survey of Ireland (GSI) to establish a groundwater/turlough flood monitoring programme in conjunction with the OPW which is studying turloughs in Roscommon, Galway and Longford in unprecedented detail. The Minister noted that temporary monitoring systems had been put in place to examine water levels in Biarfield and Lough Funshinagh and the excavation of a swallow hole had taken place in Lough Funshinagh while an aerial survey of Castleplunkett and a drone survey of Lough Funshinagh had also taken place.

Jeremy Buckley, PRO of the Irish National Flood Forum told the conference that over 50,000 people were still without flood insurance cover in Ireland despite all the monies which had been spent on flood defences in various towns and communities. He also noted that if homeowners were unable to get insurance cover then they had a very good case of trying to get their property tax reduced and he called for all TDs to support the Flood Insurance Bill which is being moved by Deputy Michael McGrath.

“The rationale behind CFRAMS is protecting as many people as possible from flooding in as short a time frame as possible, which means that no importance is placed on rural communities, farmers and their livelihoods and the work now ongoing in relation to CFRAMS offers little or no benefit to farmers and rural dwellers.

Mr Hanley also said that there is increasing recognition that much better management of the River Shannon is needed, not a mere talking shop which further contributes to global warming with lots of hot air, but a single independent authority, with the remit and the necessary authority to deal with the issues that the Shannon presents.

“As the single River which drains huge areas of Ireland, management of the River Shannon is a crucial issue not just to farmers in county Roscommon but to all of the people of the counties that adjoin the River, including the 20,000 farmers in the region. Much of the river has remained untouched in terms of maintenance for over a century and recent flooding events have brought home to all concerned the need for proper balanced management of the river.

The CFRAMS report recognises that water levels along the River Shannon, particularly in lakes, would be much lower were cleaning to take place, yet this is not recommended.

It recognises that with proper cleaning of silt and vegetation, levels in Carrick-on-Shannon would be 42 centimetres lower, Leitrim Village and Portumna levels would be 40 cm lower and Mulkear would have Shannon levels 100 cm lower than present. Yet, it is hard to comprehend that it does not recommend cleaning, citing economic and environmental reasons. It’s high time that people living along the Shannon flood routes became a protected species!” he concluded